The word “tattoo” is definitely something I try and avoid when picking out makeup.  I mean when you put the words “tattoo” + “makeup” together I automatically think of horribly botched up permanent tattoo’d eyeliner…GROSS!!!

But I have heard so much buzz on uTube and various blogs about this amazing new Maybelline Eye Tattoo Cream Gel Shadow, so I had to pick up one to test out for myself!

Maybelline claims that this Gel Shadow wears up to 24 hours and won’t crease, smudge or budge at all!  Pretty big claims seeing that most cream shadows end up creasing on my eyelids in less than 5 minutes.

I think what really reeled me in was the fact that everyone was saying that this new product was a perfect dup for MAC Paint Pots.  Needless to say I would rather spend $7.00 on a drugstore eye shadow base than $18 for the MAC version!!

Check out my little collage of pictures I took! 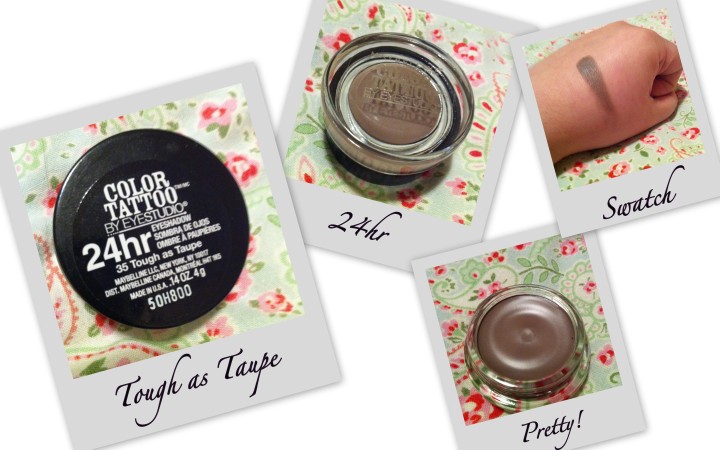 To be honest with you, I haven’t really used this product very much.  Its a lot darker and more pigmented that I had imagined (which is a good thing) but really doesn’t fair well for a daytime makeup look.

But the few times I have used it I have really enjoyed it.  And while the product did crease just a tiny bit, it mainly stayed in place the whole day.  I can say that it is probably the best cream eye shadow I have purchased thus far!!

Now, if they made a nice nude/neutral color this would have been a complete home run!